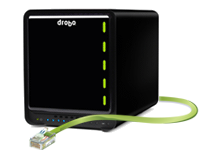 My geek Xmas gift to myself was a Drobo FS

. Drobo FS  is a storage mount where you insert plain SATA hard disks. It’s biggest advantage is that it takes over the management or redundancy with your inserted disks and there is no need for you to configure replication redundancy like RAID etc. Your data is distributed across these disks but you don’t know that, you only see the device as one storage. When a hard disk fails, it notifies you, but it continues to work and you can replace the faulty device with a new one, without having to take any other actions. If you have inserted lots of disks, it can tolerate 2 simultaneous faults!

I bought the Drobo FS version, because I needed a network device with it’s own IP address, that can be accessed by all my computers and that can also be accessed even when I am not at home, without having to leave a PC turned on (the PC where the Drobo has to be plugged in, if it is not the Ethernet version). I bought it from Amazon.co.uk because the greek dealer for Drobos (e-shop.gr) didn’t have the FS version available, but only the USB versions (and of course the “cheap” USB versions are sold in Greece at a price higher than the FS versions abroad, typical greek market).

More info on Drodo on this demo video.

Drobo runs a custom Linux distro and there  are ports of useful apps for it, called DroboApps. DroboApps were another major factor in my decision to go with Drobo. Apart from a fault redundant network storage, I also had some other requirements like setting up an FTP server and a code repository for my personal projects.

I currently have istalled the following “official” Apps:

Apache(www): haven’t used it much, because Drofbo clearly isn’t supposed to be used as a www server. You can load mod_php on it, but with no supported database like MySQL, it is not of much use even for testing. The only reason I installed it is for the web admin interface

Dropbear(ssh): has been proved useful in some reboots, change of permissions, creation of folders

PureFTPd(ftp): one of the most usefull Apps for me. Having forwarded the FTP ports through my router, it is now available to the internet. Apart from creating my own storage cloud (like a personal Dropbox), I also have automated the backup process in some of the Dedicated Servers I use for various personal projects. They are now configured, after doing their daily full/incremental backups locally, to sent them over to my home as well 🙂

Transmission(torrent): I guess I don’t have to say much about the usage of a torrent client in a device that is always on 🙂 One thing I need to mention, is that I didn’t install the command line official App (CTorrent) but the port of the Transmittion client on Drobo that I found on DroboSpace. (DroboSpace is the community of Drobo users/developers – it’s a shame that you need to provide a Drobo SN to register). The Transmittion torrent client has a web interface that you can easily expose through a port in your router and manage your torrents from far away 🙂

Subversion: used as my central code repository in order to sync  and version code for my personal projects from various places. Again this is not an official App, but I found it on [email protected] a website maintained by an indivudual Drobo developer, that also has other Apps underway. You can also find a very useful cheatseet to manipulate Drobo through the command line on his site!

Apps that I haven’t installed yet but probably will give a try in the future are rSync, NFS, Wake-on-Lan and maybe a Media server.

My experience so far in general could be described as great! Certainly DroboFS isn’t a cheap product if you only need some storage, but I haven’t regretted for spending some more money for all the ease it provides me with! It provides you with peace of mind for your data as it promises and that is certainly a big plus, if you don’t have the luxury to worry about such things.

The biggest disadvantage I have found is that it lacks a Linux management Control Panel! This is a little bit ironic for a piece of hardware that actually runs on Linux! There are some opensource ports of the Control Panel and some command line tools on Ubuntu repositories, but these don’t work for my network Drobo but only for the USB versions. So I am tied with my Windows laptop in order to create new shared directories (Samba shares!), users, email notifications rules and apply firmware updates. Moreover, even with my windows laptop, the Drobo Admin App doesn’t discover the Drobo automatically in my network as the manual says it should, but I have to connect them directly with an ethernet cable. However, I must admit that there are not frequent processes, you set them up once and forget them.

Finally, I would like to point again to this website, that is a very useful resource for Drobo owners, together with DroboSpace!